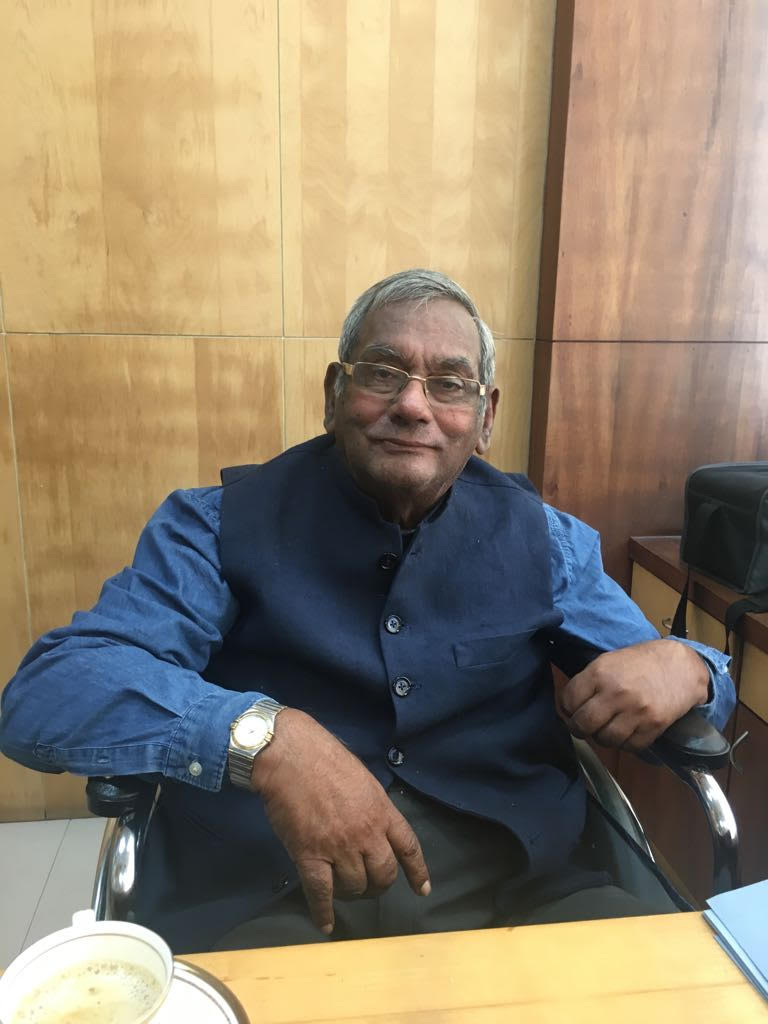 Mr. G. S. Davar, is the present chairman and son of Late Mr. L. S. Davar founder of L.S. DAVAR & CO., the Oldest and Most Trusted Tier-1 full-service Intellectual Property Law Firm of Indian Origin, which was established Headquartered in Kolkata in the year 1932. Mr. Davar completed his higher studies and holds his specialization in Electrical Engineering from Germany. He worked there for five long years and is well versed in the German language apart from English and his native language Hindi.

He holds considerable experience of over Five decades in industrial property litigation, with a particular focus on patents and trademarks. He is among the great visionaries’ in the field of IP, advises on unfair competition and is presently consulting into the work ethics of the company.

Mr. Davar handled national and cross-border disputes in all types of IP cases, including infringement, invalidity, and preliminary injunction actions. Mr. Davar is known for his great procedural skills and his talent as a patent attorney.

He is a firm believer of working hard and deliver extraordinary services to all his clients, according to him a happy clientele adds to his professional affiliations. His focus on deep understanding of the IP law and a strong value system set up the foundation of the firm.

Mr. G.S. Davar used to deliver lecturers on IP Law in many universities.

Nevertheless, at the age of 84, he is still simple with a down-to-earth personality and as a part of his CSR, Mr. Davar is the President of Bustee Welfare Centre (BWC) and has been actively involved in the mission of the BWC. “Imparting free education to the underprivileged children to make them self-supporting happens to be one of his primary goals". It was his visionary thinking to make a difference in the lives of less fortunate people by creating sustainable opportunities. To realise this goal, BWC introduced for them primary as well as secondary education and a host of other programmes like Adult Literacy, Mother & Child Project and Vocational Training. “Today, they are skilled, ready to face challenges and the part of a better community.”

Dr. Joshita Davar Khemani is the managing partner of L S Davar – India’s oldest and vibrant IP Law firm. She has been managing the day to day operations of the firm for the last 30 years. She advises the top notch  IP counsels of fortune 500 companies as well as partners of the foreign law firms on multiple aspects of IP protection in India. She advises select start-ups, writers, artists and performers and helps them protect and commercialize their inventions and creative works. She helps clients maximize business value from their intellectual assets. In addition, she manages more than 200 plus staff including 50 plus patent attorneys, 30 plus trademark attorneys and 15 plus design and copyright attorneys. She makes sure that every IP assignments gets the full attention it deserves.

Over the years, she has earned the reputation of helping companies move up the IP value chain and gain substantial commercial value from their IP assets. She specializes in mining IP and devising strategies to help clients protect and maximize business benefit. She also specializes in effectively mitigating IP risks and constructively resolving IP disputes. Moreover, she has played an important role in spreading IP awareness and building IP culture among corporates, research groups, academicians and students.

Apart from several other awards, she has been adjudged as one of Top 100 Powerful Women in Law in India and also got Certificate of Excellence in the field of IP from Advisory Excellence, UK . Under her leadership, the firm has got multiple awards like as follows :

She is also a member of CII, ASSOCHAM, FICCI, INTA, AIPPI, APAA, ECTA and AIPLA.

Dr. Sourabh Khemani is the Group Director of L S Davar & Co – India’s oldest (established in 1932), reliable and vibrant tier 1 IP Law firm of the Indian origin.  He is well versed with the IPR Laws and procedures, holds two patents in his name on plastics recycling and was awarded the prestigious Bharat Gaurav Award in 2017. Under his guidance, the firm has advised 1000 plus clients including fortune 500 companies, MSME and tech start-ups not only in IP protection but also IP enforcement and licensing.  Apart from being a part of the top management of most trusted IP firm of India, he has over 40 years of hands-on experience of running industries related to plastic products.  He has successfully carried the legacy of the Khemani family which has the distinction of importing India's first automatic Plastics Injection Moulding Machine in 1937 and laying the foundation for mass production of high quality plastics products in the Indian subcontinent. He is also a mentor for center of excellence (COE) – IOT with Nasscom where he mentoring more than 20 start-ups.

The Indian Plastics Institute conferred the highest award of 'Fellow' (FIPI) on Dr. Khemani in 2010 in recognition of the extensive work done by him for the Institute and the Plastics Industry as a whole. Additionally, he is an Advisor to the Department of MSME&T, Government of West Bengal, and a member of the Think Tank Group to the Ambassador of the Republic of Colombia.

He was conferred with a Doctorate Degree (PhD.) in Philosophy (Oriental Learning) from the Indian Institute of Oriental Heritage (Open University) by the Union Minister of Commerce & Industries, Govt. of India in 2016 at New Delhi and a Higher Doctorate (D.Litt.) in 2018.

He is an accomplished Application Polymer Engineer. He is also a highly skilled expert in the processing of polymers using various processes and is known for his execution skills, financial expertise, people management capabilities. He has also received training from global giants like DuPont (USA), and ICI (UK). He has always demonstrated rapid learning capabilities and adoption of innovative techniques and has a deep understanding of multi-layered and cross-layered project monitoring for seamless integration of services.

He is also a philanthropist and a committed social worker. He devotes plenty of his time and effort to the upliftment of the underprivileged section of society. Additionally, he is the honorary Treasurer and Advisor in Chief of The Bustee Welfare Centre and an active member of The Rotary Community Corps Committee of Rotary International. Apart from being a Patriot and a Nationalist, he is quite popular amongst his friends for his extensive knowledge, quick wit and pleasing outgoing personality.